In the south of Haiti, violence against marginalized communities is an ongoing problem. In the last few years the number of reported assaults has been very high, and One Hundred For Haiti offered to help Little Footprints, Big Steps fund the GTPE (Working Group for the Protection of Children) initiative, a series of educational sessions in rural communities, letting parents, teachers, and locals know what violence is and how we might respond to it.

When the first GTPE anti-violence training took place in the crime troubled Haitian community of Derrière Fort, the hope was that the community would respond positively to it. This is the first time in history that any organized conversations about assault, abuse, and protecting children have ever taken place in the south of Haiti.

After the training a group volunteered from within the community to serve as a follow up committee to further educate their neighbors. They did this on their own accord. No one suggested there should be a follow up committee. They made it happen because they believed the work was important.

Their inspiration led to people in every subsequent GTPE community to form their own follow up committees like this first one. 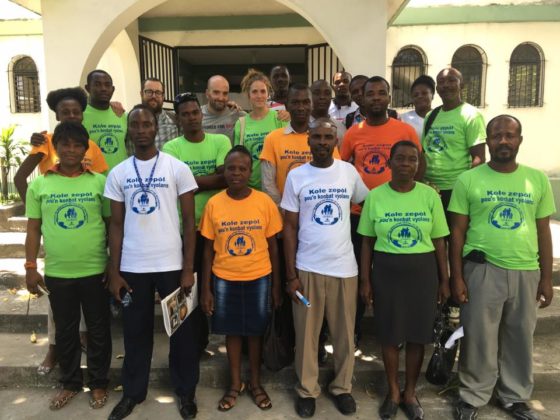 Here, Morgan Wienberg from ‘Little Footprints, Big Steps’ and GTPE members along with One Hundred For Haiti Board Vice President Nathan Bean and Executive Director Greg Bennick stand wearing shirts that say “Standing shoulder to shoulder we will combat violence”.

The following photos are from a GTPE training in late 2017 in the community of Randell, an extremely rural region.