Seattle hardcore band Safe and Sound is a band with heart. They had a record release benefit show on the 4th of March which raised $800 for One Hundred For Haiti. Jim Williams had a chance to ask them a few questions recently about their thoughts leading up to the show.

See the FACEBOOK EVENT PAGE for more information on the show.

Introduce yourself and give us a little history of the band.

I’m Jaxon, I sing. Safe and Sound started January 2nd 2012 between a group of new friends as a 4 piece youth crew band. We went through a few member changes and additions, toured Canada, and the west coast a few times, released a demo, a promo tape, an EP, and a 7″ and now we are here with a completely different lineup, sound, and record that just came out!

What made you decide to use your release show as a benefit?
We all have talked a lot about wanting to use our platform we have from being in a band to actually do things that matter. We want to spread awareness and educate people so we thought teaming up with Greg and 100 For Haiti to make our release show a complete benefit for them is a giant step forward in what we want to do and what we want to see others doing in hardcore.

When you hear the phrase “a little goes a long way” what thoughts or ideas come to mind? 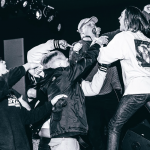 The ability to take what you have for more than it’s worth. To see potential in things that other people wouldn’t. To sustain, to influence, to impact.

Talk about the idea of community as it relates to your involvement in the hardcore scene.

Community is something hardcore desperately needs because it brings everyone together to see a common goal or to work together to strive for positive impacts in an outside of the scene. It’s putting on a benefit show for someone in need, it’s writing zines, it’s reaching out to the local schools or community centers to get kids involved in music, community is a bond and a closeness that brings ideas to become realities and allows people to talk and share ideas about anything. To me a functioning hardcore community is an active one. Booking shows, starting a bands, anything to keep your local scene thriving.

How important are humanitarian efforts to Safe & Sound as a band? How important do you feel those efforts are to hardcore and punk in general? 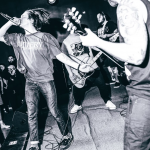 I think it’s very important to consider the implications of every action we take. Kindness and sympathy can go a very long way in every aspect of life. To extend a hand is to take a big step and I feel like in hardcore there are those more than willing to extend but there are many more willing to take or to stand by. In the end it’s all up to a moral choice to want to help or hurt. You can build something or you can break something. Efforts to bring people together in a community are strong in punk and hardcore but is the intent of it all always to benefit other people? Not entirely in my mind. But to those willing to build more than they break, they are the ones really taking steps in this world.

What’s coming up next for Safe and Sound? Future tours, releases, plans?

After our record release we will be embarking on an almost month long tour through the U.S. After that we will be playing the final Bane Seattle show in April, Rainfest in May, a few summer tours, and a Midwest/South tour planned in September. Our goal is Europe and Japan so hopefully early next year or sooner we will be in one of those places. Also expect an LP next year!