Seattle did it right. Check out the results from all the angles of this show: door/entry, raffle, bake sale, donations. This was from one night at a benefit punk/hardcore show at a small venue in Seattle. The show organizers worked to find sponsorships in the form of donations to a prize giveaway or raffle (note: check the laws in your state about raffles. In Washington we can’t officially do a raffle as a charity organization, so instead we did a “prize giveaway”. You’ll figure it out. Let us know if you have questions about that). Simultaneously, we had a team member meet with potential donors and found one willing to match all donations. Add a donation can or two on site with clear signage to let people know what the show is about, and a delicious vegan bake sale, and this show was a total win.

We asked promoters Terrence LeBeau and Chris LaPointe for their list of their top suggestions about doing a show of your own! 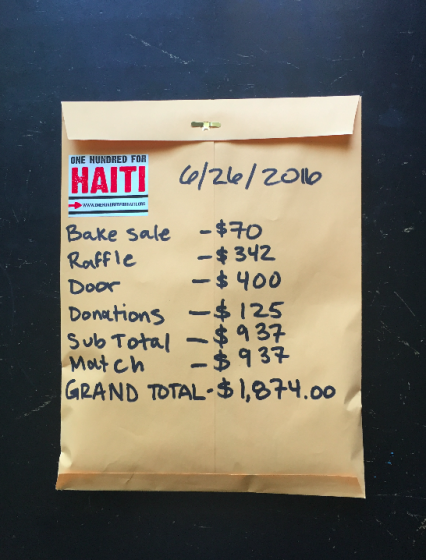 CHRIS:
Successful Fundraiser Tips
1. Be well organized
2. Create realistic fundraising goals
3. Create a task list and timeline associated with goals
4. Revisit task list and goals on a daily basis
5. Be resourceful/use all current resources first – people to help with event, potential donors, etc.
6. Don’t try to do it all yourself. Assemble a team. Delegate responsibility as needed.
7. Meet regularly with fundraiser team (once a week). Continue to delegate tasks and mark off tasks
8. Clearly and consistently articulate your cause/ask
9. Don’t be afraid to ask for money/support
10. Follow up with donors is essential – thank donors following the event. Hand written notes go a long way.

TERRENCE:
1. Focusing on community first and foremost. This absolutely could not have happened without support from friends in bands to play the show, friends who had record labels and donated to the prize drawing, friends who knew people who would donate cool things to it, and most importantly having a community who cared enough to come out on a work night and participate.
2. Allowing for plenty of time to plan. Chris and I worked together and gave ourselves about 2 months to iron out the details.
3. Focusing on things in the order of importance. (i.e. make sure the bands are locked in before talk of the prize drawing / raffle or anything else is happening)
4. Having structure in the planning process. When planning this show, we’d schedule weekly meetings to just sit down and talk about how it’s going and while we were sitting also use that time to text/e-mail people that we’ve been meaning to in regards to the event.
5. I think that the final count shows it but the prize giveaway (raffle) made nearly as much as the door did so I think that for future events a prize giveaway / raffle should be a key focus.

Text from the Facebook announcement for the event…
SEATTLE! TONIGHT! A benefit show for One Hundred For Haiti

The best part: an anonymous donor will be DOUBLING all donations and money raised up to a total of $1000 for the night. That means that if we raise $1000, the donor will double it to $2000.

Doors at 7PM. Show AT 7:30PM at the Black Lodge (next to the Victory Lounge on Eastlake).

ODD MAN OUT (THE straight edge band of the next decade)