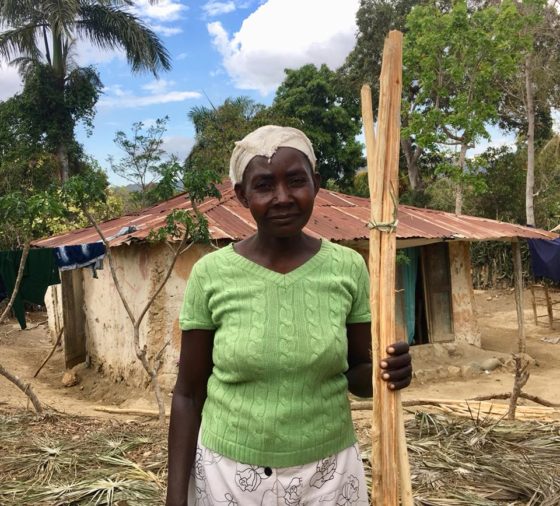 This is Madame Cleguy. She lives in Bas Pinal Haiti. To make her living as a broom maker, she walks twelve hours to where a plant called lantanier grows, collects as much as she can carry on her head, and then walks twelve hours back to make brooms with the plant leaves. (Lantanier is seen here drying on the ground behind her in this photo).

She can usually only carry six brooms worth of lantanier which when complete she will sell at market for a profit of 88 cents each (less than six dollars total). Almost every woman in Bas Pinal makes their living this way. And they have, for over eighty years.

Check out the work our friend Brenda Reed Cooper at Haitihelpers is doing to make the broom making process more efficient and profitable for these women.

It is always important to remember the constant beauty experienced in Haiti along with the struggles.

This is Madame Papo. She lives in Bas Pinal, a small community a few kilometers from the center of Ranquitte. One Hundred For Haiti put a roof on her house last year.

I met her yesterday for the first time. I asked what she thought of her new roof. “Trè kontant”. Very happy.

This is Mr. Timamoun. He lives near Ranquitte Haiti. One Hundred For Haiti put a new roof on his home last year. Today I met with him here and he told me through a translator, “Now when it rains I don’t need to sleep standing up in the corner.”

He and his family were drying some cassava in the sun. He asked to give me some to eat along with some tomatoes. I tried to say no but he insisted as a thank you for the roof.

I had them for dinner tonight. Every bite was gratitude all around, for and from everyone involved ❤️ www.onehundredforhaiti.org 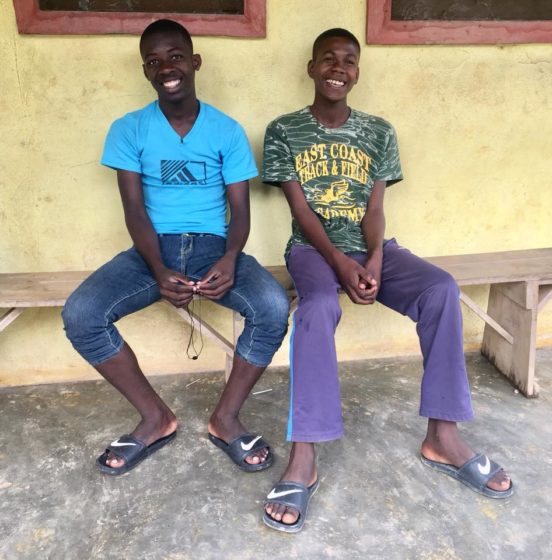 On the left is Faustin and on the right is his friend Frantz. They are eighteen and live here in Ranquitte Haiti.

Faustin told me, “When I am hungry I call my friend and we talk and tell stories. And then I am not hungry anymore.”

Fifty kids ate healthy food today at the feeding program in Ranquitte which Fresnel Desauguste started with money from his own pocket. We now support that feeding program, calling it Healthy Kids, Healthy Future. Forty kids per day come to eat what might be their only meal of the day.

This is Mr. Leon Joseph. He lives in a very rural area called Bas Pinal, Haiti in a thatched roof house constructed with mud walls about the size of a kitchen table. I met him today and he is one of the most photogenic humans in history. With your help we will build him a real roof this year. The problem with thatched roofs is two fold (amongst other things). During the rain, leaks make sleeping basically impossible. No one should ever have to endure sleeplessness. In addition, the roof can easily be infested with bugs, some of which carry disease. A new roof will change all of that.

A little girl pumps water for her family in Ranquitte Haiti. There are two more pumps like this one in the center of town which we hope to repair this year in conjunction with the local Mayor, Edelin Phillipe. We’ve often focused on rural people over the last few years but the Mayor raised the very good point that because the condition of water pumps in town is bad, residents of the town often have to walk to rural sites for water which taxes the already sparse supply there and makes life even more difficult for rural people. We hope to shift that balance and ease stresses.

This is why we do what we do. Clean water flows from a new tank at Benefice, near Ranquitte Haiti. The mayor of this area and I met today. We have big ideas for access to safe cholera-free water in this region. All of this paid for by donations to One Hundred For Haiti ❤️ He has some water sites he would like to focus upon for 2018 and we have a list of the forty sites we’ve been managing and maintaining (and building) for the last few years. Only possible with your help. Consider becoming a monthly recurring donor. It goes so far over time.

This week has been a lesson in adaptability. I’m in Haiti (its Greg writing you tonight) where very little ever goes as planned.

I’m here at the promise of an international group who shall remain unnamed who evidently connect pairs of global cities together in partnerships to develop both cities culturally and economically. I’d received a personal invite two weeks ago to be a part of a diplomatic team who were going to travel the north for five days. This was billed as a trip which would allow heads of NGO’s and select government officials to meet and travel and spend close time together while discussing matters of job creation, micro loans, and development throughout Haiti.

The list supposedly attending was amazing. Members of President Juvenal Moïse’s cabinet, people from the southern command (who can facilitate movement of huge construction machinery from the USA to Haiti), members of immense NGO’s, and many others. I had to say yes. Because bureaucracy can be as much of a facilitator to progress as it can be an inhibitor, and because even the best meetings wouldn’t result in immediate direct change, I doubled the length of the trip to include time later this week in the rural area of Ranquitte where we do a large amount of work so that I could be amongst the people. I am glad I did.

The meetings were a bust. One took place. Evidently the organizers either didn’t coordinate the event, never were involved, or just didn’t know how to make an event of this magnitude happen. On the first night, members of the President’s cabinet showed up and we (the cabinet, about five NGO’s, some private investors and others) sat around a table. There was no structure and the event started an hour late. We each introduced ourselves for a moment then the group heard a for-profit pitch by a private business for over an hour. Then the Haitians present argued in Kreyol and French for an hour about an internal Haitian issue involving a shipping container of some kind. All in all it was largely a waste of time.

The next morning, having realized that the event was a bust and to salvage the experience, I met with some of the people from the night before and made some good connections which can result in real change for some specific communities I know here, then left in order to forge my own proverbial way. Brenda Cooper from Haiti Helpers (another small NGO who work in the same area in the north as One Hundred For Haiti) and I went with Fresnel Desauguste (in-country director for both of our organizations) to stay for three days in Port au Prince at a friends’ private residence. This friend and his family introduced us to more people in the first two hours than the supposed government meetings did in 24 hours. Its actually turned out to have been an amazing few days and will potentially have wide ranging success for One Hundred For Haiti moving forward.

Tomorrow, Brenda flies home and Fresnel and I head to Ranquitte to do hands-on work for five and a half more days. Can’t wait. The people who live in Ranquitte are who we work for, and listen to and be with them will be more important than any meeting could have possibly been. Adapting to change and helping others to do the same.

Photo above: Port au Prince haiti tonight, taken from a Mavic Pro drone.
Photo below: L to R, Fresnel Desauguste, Jacques Denis (who’s medical endeavors immediately after the earthquake were the reason One Hundred For Haiti formed the way it did), yours truly, Joelle Denis (Pediatric doctor and long time advisor and friend!) 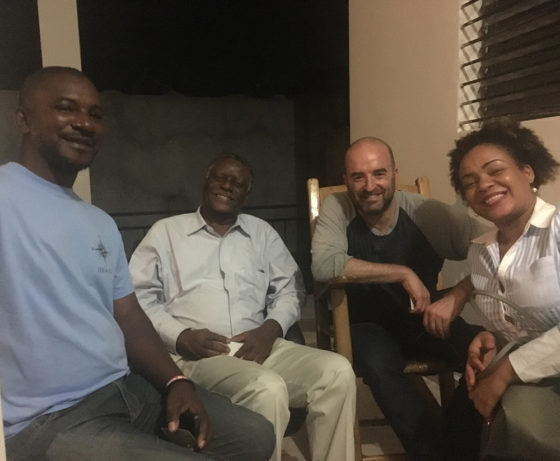