We just launched an exciting new campaign: in addition to Moto Logistics and the expansion of that program further into rural Haiti, we just launched a campaign on Crowdtilt to buy bicycles for fourteen rescued former child slaves currently living at a safehouse in western Haiti. We raised $1100+ in the first day alone.

Holli Griffiths, Project Manager, returned from Haiti last month having met a group of young boys who were former child slaves. She was so struck by their courage and experiences – all of them teenagers and pre-teens – and in sharing their story the idea came up to buy them bicycles so that they could live as kids are supposed to live: having fun, laughing, and working less hard to get to school and to meet one another. This program reflects a change for One Hundred For Haiti: its not relief in the traditional sense. Its not development along the lines of what we have done before in terms of helping people. But who could argue that buying each former child slave a bike isn’t the best idea ever? Holli excitedly suggested, “Let’s keep it a secret from the boys and present them with all the bikes at the same time…and then film their expressions and reaction to receiving the bikes! I am more excited for this project than perhaps I have ever been on any other!”

OTHER NEWS:
Holli also successfully located new recipients for our Moto Logistics program in which we provide a zero percent interest loan to verified organizations in Haiti for the purchase of motorcycles. As most people in Haiti travel by motorcycle, there are remarkable opportunities for these motos to be used as taxi vehicles, thus providing jobs for the drivers. The organizations use them by day to transport patients and supplies and by night as moto-taxis. (More information on Moto Logistics can be seen here.

One Hundred For Haiti provides the motos, a full tank of gas for each, the first year of insurance, and helmets. In return, money raised from the taxi use is split between driver’s salary, a donation to the Haitian organization, a repair fund for the moto, and repayment of the loan. ‘This is not a hand out,” says Holli Griffiths, “It is an opportunity to generate funds and create self-sustainability. The beauty is that 100% of the money is then ‘recycled’ into launching more projects throughout the country. One single donation can be used again and again.” 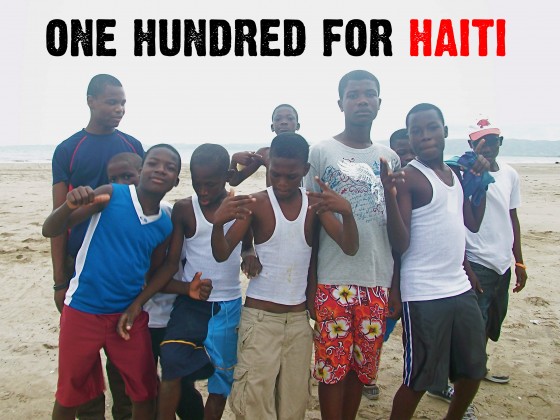