I am just back from Haiti, where we set up plans for building, maintaining, and repairing forty rural water tanks to prevent deaths from cholera-infected water. The idea, and it is working effectively, is to capture natural spring water (which potentially has cholera in it after any disruption to the water table by hurricanes or cyclones – all of which are common in Haiti) in cement tanks built by local Haitians. The water in those tanks can then be treated before and after any storm to kill the cholera. Since the start of the project, deaths from cholera (which had been rampant before) have dropped to ZERO in the region. One Hundred For Haiti plans to keep it that way.

The project was originated in 2011 by our friends at Peacework Medical. One Hundred For Haiti paid for ten tanks to be built in 2014, bringing the total number to close to thirty tanks. When Peacework mentioned early this year that they were going to have a smaller footprint in Haiti, I said that One Hundred For Haiti would take over the building of any new rural tanks (this week we identified ten new tank sites), as well as maintaining the ten tanks we paid for last year, and doing upkeep and repairs on twenty earlier tanks.

What’s the best way for you to support this work? Sign up for a recurring monthly donation. The link is on the right. Some people donate $100 a month, or $20. Some donate $5, and others $1 a month. It all adds up more than you realize all those donations are used for raw materials for building the tanks, for Haitians to work on the construction, and any chemicals needed to treat the water. One Hundred For Haiti is a fully fledged 501(c)3 non-profit.

Think about it: for the price of a few coffee drinks a month, you can contribute to a major health initiative with long ranging effects and direct impact for people in rural Haiti.

We will be posting more photos and videos soon about the project and about this past week there! 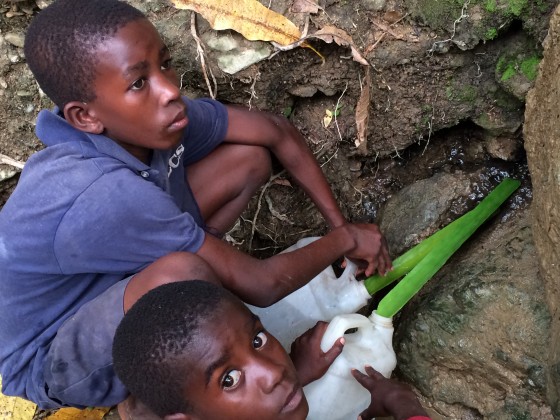 Two boys use leaves to direct a trickle of water into a plastic jug. We plan to build a tank here to catch this water. The tank when filled can be treated with chemicals to kill deadly cholera in the water. 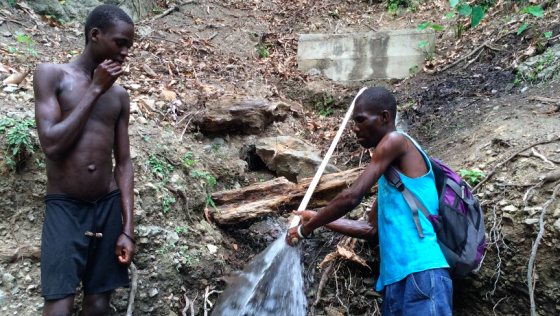 At a rural site, a tank paid for last year by One Hundred For Haiti is flowing strongly with clean fresh water. Water is life. Imagine the effect of forty (or possibly more) of these tanks on the communities they serve and the tens of thousands of people protected as a result.