As the last hours of 2017 tick away, we wanted to celebrate the accomplishments that your support made possible throughout the year. We had our most successful and active year by far and have so many things to share about the last twelve months, and some on the next twelve to come.

We started the year strong, having come off a solid relief effort for Hurricane Irma and the damage it caused. Our friends in the band HIMSA gave us a solid boost with a donation from their reunion show and let us put roofs back on houses which we wouldn’t have been able to otherwise. The involvement of bands from the hardcore/punk/metal scene didn’t 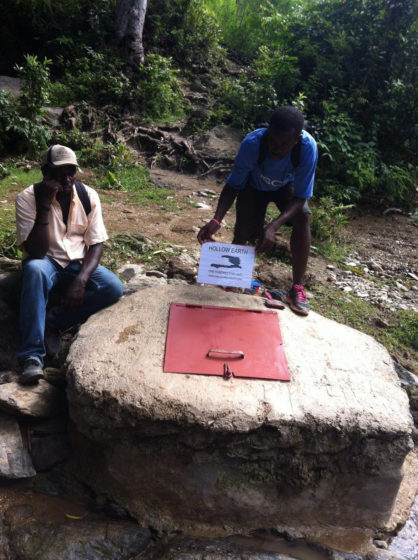 stop there however, as HOLLOW EARTH put up a One Hundred For Haiti banner and put out information and stickers and a donation canister on every night of their US/CANADA tour and raised enough money to fund TWO water cisterns in rural Haiti to help local people access safe drinking water through our Rural Water Project. Having bands support us is incredibly helpful. It helps get the word out, and it does so in a way which is fun and directly impactful.

If you have a band and would like an easy to use kit which contains a banner (which can be customized with your bands logo), stickers, printed info, and pins along with a donation canister, just write us anytime through our contact page and we will set you up to collect donations at your shows and when you send it to us and we put it to use, we will have photographic evidence for you of what was done with your money, much like this photo of one of the tanks Hollow Earth provided to the people of rural Haiti.

Just last week, WAKE OF HUMANITY donated $400 from the sale of customized shirts they’ve been selling in partnership with us. The shirts have their logo and ours and slogans about earth and human liberation.

Also helpful this year was the effort of TERRENCE LEBEAU who worked in conjunction with our friends and OVERCAST DESIGN AND PRINT in Long Beach CA to create a limited run series of shirts for sale from long-gone designs in the hardcore/punk scene. Bands who participated in 2017 were THE SWARM, GRIMLOCK, xCLEARx, BROTHERS KEEPER, STRONGARM, STRAIN, AFTERSHOCK, FALL SILENT, RACETRAITOR, and EARTH CRISIS. We are so thankful to each and every one of those bands and to Terrence for stepping up and making a difference.

In a completely different but incredible fundraising effort, retired Seattle municipal worker GWEN WHIPPLE finished a multi-year project as a seamstress and tailor to make and sell ONE HUNDRED purses for Haiti under the name PURSES FOR HAITI. She raised $4000 in what was basically the largest single donation from an individual in the history of One Hundred For Haiti. Check out her work at the PURSES FOR HAITI website.

In terms of our main projects, GTPE and THE RURAL WATER PROJECT, 2017 was incredible. Thanks to having just partnered with LUSH who took us on under their program where funds from the sales of LUSH products are distributed to non profit organizations doing work on environmental, human rights, and animal related issues, we were able to vastly expand GTPE and RURAL WATER PROJECT support. We also added support for a local feeding program to provide daily meals to schoolchildren in the Ranquitte region.

GTPE:
We want to help change the social structure of Haiti in terms of rape, abuse, and violence against women and children. We were hoping to be able to fund our GTPE partners (social service organizations, outreach workers, and our friends LITTLE FOOTPRINTS, BIG STEPS) for nine community education trainings this year to teach community members about proper conduct, supporting victims, and how to make change at home and locally in terms of how men treat women. But thanks to saving money in unexpected places we were able to provide funding for anti-sexual assault trainings in SEVENTEEN communities. In the first ten trainings alone our partners reached, directly interacted with, and trained 7,398 students and 1,002 community leaders and adults in better conduct, sexual assault dynamics, how to support victims, and ways to prevent violence. 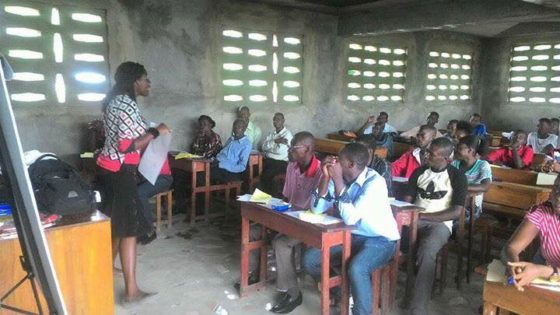 To spread the word about these trainings and the ideas in them (ideas which are new to many people in Haiti, especially the men) we reached thousands of people by playing campaign messages on a sound truck in Ducis Market. This is one of the largest local markets in the region. Community members from many rural communities come to the market place to share ideas and buy and sell provisions. Morgan Weinberg of Little Footprints, Big Steps reported, “Many people in the market place came to stand near the sound truck & asked for flyers regarding sexual assault. They were incredibly engaged, asking questions & presenting cases / commentary to the GTPE agents!”

A partial script which was shouted over the sound truck repeatedly throughout the market time reads as follows (translated from the Haitian Creole):

“There’s been too much violence against both children and women,”
“How do you feel, you as young men…you have your girlfriend, or you have your wife, and then you see that you’re raising your hand on this person.”
“How do you feel? Where did you come from, you as a young man? Wasn’t it from the stomach of a woman?”
“Wasn’t it a woman who raised you? Wasn’t it a woman who breastfed you so that you could become what you are today?”
“And now… you’re beating women? What’s even worse is that after you’ve beaten her in the morning, in the evening you’ll lie down right beside her.”
“It’s time for us to stop violence against women.”
“When you are violent against women, it’s bad for the children in your home. When you are violent, the children will copy you. Children will do the exact same thing.”
“Rape doesn’t have a role in society! We need to make declarations against rapists! We need to denounce them! It’s time for this to end!”

In addition, in every community where trainings took place, follow up protection committees were initiated and created by local people after our trainers left, so that the people themselves ON THEIR OWN INITIATIVE would continue the work of teaching respect, victim support and reporting, and violence-free social dynamics. This work will continue actively in 2018.

HEALTHY KIDS, HEALTHY FUTURE:
This was a project which was entirely Haitian-initiated. While in Haiti last year, we learned firsthand that our in-country coordinator in Haiti was personally funding a feeding program out of his pocket for 15 children 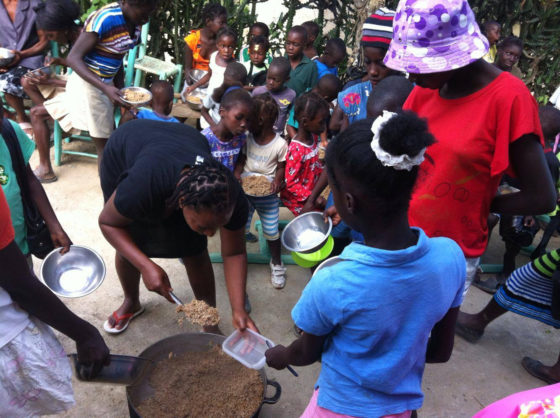 in his rural community, feeding them twice a week so they wouldn’t have to go to school hungry. Thanks to your donations throughout they year, ESPECIALLY the recurring monthly donations, we were able to support our friend to help him expand his feeding program. This feeding program now provides meals to fifty children five times a week. Haitian kids who are not going hungry means kids who will be able to focus in school, and in turn kids who will bring their education into the future.  Without donor support, these kids wouldn’t have had the chance to eat on a daily basis or to drink safe water. These children are indeed the future of Haiti.

RURAL WATER PROJECT:
In 2017 we paid for the building and maintenance of clean water facilities in SIXTEEN communities. These are locations which are often impossible to get to by car, and which cannot rely on any sort of municipal water system. There continue to be ZERO cholera deaths in the region since the start of the Rural Water Project. We also paid for water access in FIFTEEN additional communities. This aspect of our work is just underway and we will have photos for next year’s end of year report. We plan to build at least nine more water cisterns in 2018 and likely many more. Photos of the 2017 tanks follow at the end of this report.

OVERALL:
This was our strongest and most successful year by far. It was made possible through the generosity and consistent support of people like you, and that includes the people of LUSH who were incredible to work with.

By signing up for a recurring monthly donation, you add your support to an ongoing list of people who help us do what we do. It is incredibly helpful no matter what the level of donation you choose.

Our goal is to stay committed, even when other global disasters take focus and attention away from Haiti. It would always be easy to change quickly to the next disaster which comes along, somewhere else in the world. We’ll let others help in those areas. We are focused on the friends and people we serve in Haiti and we will continue to be, long after Haiti is out of the headlines. We promised people that we would be there for the long term, until sustainability from within causes us to not have a need to exist there anymore. That is the ultimate goal: to help create the conditions under which we are no longer needed.

Thank you for supporting us. We have more work to do with the RURAL WATER PROJECT, with GTPE, with the HEALTHY KIDS, HEALTHY FUTURE initiative, and ultimately working with Haitians to make all of these projects sustainable from within the country. We are in this for the empowerment and development of the people we serve in Haiti, not for our own glory.

This entire update is for you, in honor of them.